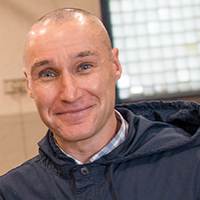 Derek Gallagher started attending the Charlestown Club when he was six years old. After graduating from Don Bosco Technical High School he studied at University of Massachusetts Boston while working as the Athletic Assistant at the Club. Over his tenure, he has acted as the Athletic Director, Program Director, and is now Executive Director.

Derek has worked to build partnerships with the Charlestown community, including relationships with businesses in town. While taking on his role as Executive Director takes him away from direct programming with kids, he continues to stay involved with Club activities. He helps referee basketball games, pops into evening programs, and even hops on the school bus during summer camp.

Derek’s roots with the Club run deep. His parents met at the Club back in the sixties. After he was announced as Executive Director in Spring 2018, the Charlestown Patriot-Bridge quoted him:

“I was a Club kid from the day I turned 6,” he said. “I remember my father bringing me through those doors and the adults who checked me in. The Club was big for my whole family, and my parents even went to the Club and they met for the first time in the Club. In 1963, my mother was in the old Girl’s Club on High Street and asked to bake cupcakes for the last day. As it happened my father was walking on High Street as she came out the door with the cupcakes. He asked if he could have one, and that’s how they first met. Thank God she made cupcakes, or we might not be here. When I was named director, I have never seen my mom so happy. She loves the Club. It’s all we know.”