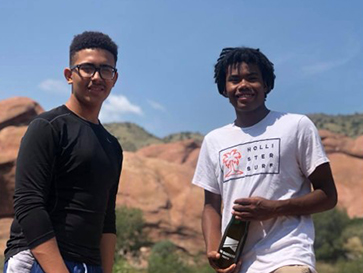 Boys & Girls Clubs of Boston and the Fish Family Foundation have been working together for more than a decade to provide global learning and travel opportunities to our teen members.

Angel, a teen member at the Jordan Club, took part in this unique adventure. His journey in the months leading up to the trip was rocky and, for a while, it was unclear if he could continue the program. Angel needed a job, which meant less time after school to participate in this weekly experience. However, given Angel’s challenges, Bri and her staff knew the program would be life-changing for him, so she kept in touch with Angel and his dad.

“We recognized that he was overwhelmed with all the things happening in his life,” said Bri. “So we presented this opportunity to him in a different way in order to alleviate his stress and remind him about all the effort he already put into class up to that point.”

The staff went above and beyond their job descriptions to re-engage Angel and make him feel supported. With this encouragement and guidance from his father, Angel worked tirelessly to balance school, work, and his commitment to BGCB’s Native America Program. Angel’s determination paid off when he successfully earned a spot in the final group. Throughout the trip, he was one of the most vocal teens about his gratitude for this experience. On several occasions, he thanked his peers and staff for helping him overcome his self-doubt.

Angel’s highlight came during the group’s stay on the Pine Ridge Reservation. The morning began with a solar energy project at the Red Cloud Renewable Energy Center/Sacred Earth Lodge, a facility founded and run by Henry Red Cloud, a 5th generation descendent of Chief Red Cloud. Next was a visit to Fort Robinson, where Crazy Horse, the infamous Lakota leader, was killed during his imprisonment in 1877. The day ended with a traditional Lakota family-style dinner and a drumming circle. The lead drummer shared his story about growing up on the Reservation, moving to Los Angeles as a young Lakota man, and returning home to his community as he got older. He also talked about his belief in the healing power of the drum for all people.

Before officially calling an end to the day, the group reflected on the day. Angel summed up everyone’s feeling best when he declared, “a lack of love will tear this world apart.” As the group ended the night and the teens headed off to bed, one of the staff overheard Angel when he approached the Lakota drummer and told him, “Thank you. I’m going to take that with me for the rest of my life.”

Angel plans to continue his involvement with BGCB this year as a first-time Junior Staff working with younger Club members at the Jordan Club of Chelsea.

For more information about our travel programs, please email Adam Chaprnka at achaprnka@bgcb.org