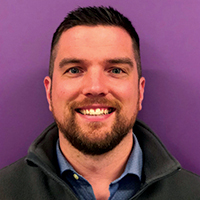 Rick Aggeler became Club Director at Mattapan Teen Center in March 2020.  Prior to that, he served as Director of Club Programs and Operations. He spent two years as Director of Operations at the Berkshire Partners Blue Hill Club and Senior Music Director for Boys & Girls Clubs of Boston helping develop Music Clubhouses at all of our Free-Standing Clubs.

He holds a B.A. in Professional Music from Berklee College of Music in Boston, MA.  Rick is also a graduate of the Institute of Non-profit Management and Leadership at Boston University.

Rick founded the Music Clubhouse at Berkshire Partners Blue Hill Club in September 2007. As a Berklee College of Music alumnus, Rick and his fellow Berklee classmates became a growing presence at the Blue Hill Club. Before long, they were providing music lessons on Friday and Saturday evenings. Aggeler drafted a business proposal to start a full-fledged music program at the Blue Hill Club, which came to fruition in 2007. In an era where musical self-expression has reached new levels of popularity among youth, the program became an instant hit. Its success led to the expansion of the program to the Yawkey Club of Roxbury in 2009 and shortly thereafter to the Charlestown, Jordan, South Boston and Mattapan sites.